The size of the stones between each photo is not relative to each other.

The more stones, the smaller they will appear. A few small ones will appear to be much larger than actual; refer to mm.

b) OR; Email the info: shop@surfsands.com

This is additional to any other discounts! 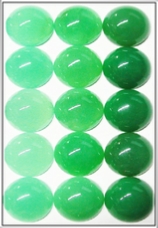 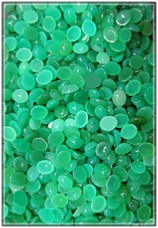 The above photo on the left

shows the range of color

that we sell as “Mixed”,

but not in the the same proportions

as shown in the photo.

Generally, a mixed lot is made up of;

more of the very light ones,

but by far it’s mostly the medium colour.

Note: Any one of these three basic shades can be selected out and supplied,

but a selection price applies.

A photo of the selected stones will be supplied for approval prior to shipping.

All of the stones were cut and polished

that had been extracted from

the old and original Chrysoprase mine

These stones are clean/cleanish and

Each size has a different proportion

of shades of green.

This is clearly evident when comparing

the 7mm rounds with the 8mm rounds

in the photos below, for example.

The stones in the photos

are cut out from the stock bags

and are therefore NOT selected.

They are indicative of

what will be shipped as MIXED.

Prices are negotiable for quantities

Australia's one and only Turquoise!

This Turquoise was mined by a public company in the late 1960's and into the early 1970's after which another company took over until mid 1970's.

It is the only commercial Turquoise mine that has ever operated in Australia.

Practically the entire production was shipped by air to USA where the Turquoise jewellery craze was still strong, although in a decline.

Back in Australia, the mining company ran into a bit of bother; it was approaching an Aboriginal sacred site and was forced to close down it's mining operations.

Besides that, they had basically run out of Turquoise bearing ground and the mining was no longer viable, anyway.

As a consequence of that, the company wanted to dispose of all of the rough Turquopise it had on hand at the time it seized mining.

The total of the rough amounted to just a couple of hundred kilos and I bought the lot.

From that, some rough were sold, some made into Silverform Jewellery and some cut into calibrated stones.

The rest, about 150 Kg, was just stored away and as the saying goes; “Out of sight, out of mind!”, and how true is that not!

So, having been bought in the mid 1970's and then stored away until it’s recent “discovery”, nearly half of a Century later, it's again available and this time for Australians to hopefully enjoy and appreciate.

This Turquoise is not just rare, but in fact VERY rare as perhaps half of the remaining kilos are small chips down to pin head size and either too small, too porous or of too low a quality to cut. 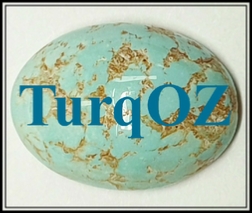 Contact us, if you like to negotiate the price on a larger quantity than what is offered, or prefer not to pay with a credit card.

The stones in the photos are an indication of what will be supplied.

The stones in the photos are not in size proportions to each other!

To avoid disappointment and

a refund having to be made;

If quantities required are greater

than the number of pieces shown, then we highly recommend to check the availability with us prior to placing the order. 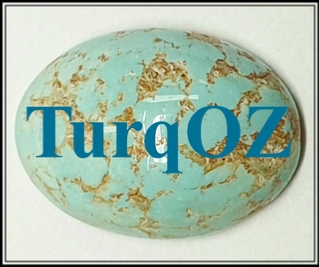 Our Boulder Opal are left natural,

as created by Nature.

Any crack or porosity has not been filled with resin or other compound.

An approximate size of each stone can be estimated by the grid size of the section which each stone is inside.

To view some of the other coloured gems we have, please click HERE. 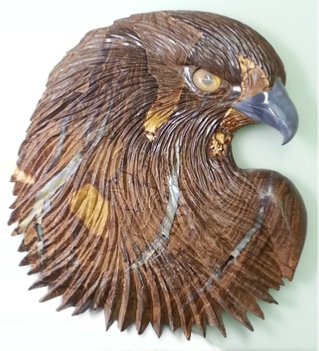